Magazine Home>Best of British: How the Ritz Became an Iconic UK Institution

It is a curious thing about Britain that our values and customs are often more highly prized — and most faithfully upheld — by those not born to them. From social mores — the débutante ball, for example, an anachronism in London, reborn in the furthest recesses of the former Soviet Union — to language, the very essence of nationhood, we find unlikely advocates. Consider the finely honed English prose of Joseph Conrad (Polish) or Vladimir Nabokov (Russian), or the dogged persistence of our moribund subjunctive in the drawing rooms of 21st-century Mumbai. While our native speakers engage subject and object in a pyrrhic battle of the personal pronoun, our grammar and syntax is championed abroad. And so to the Swiss hotelier, César Ritz, who did not so much uphold as define the values of what would become the legendary British institution that bears his name. Born in the village of Niederwald in 1850, his career got off to an unpromising start when he was assured by an employer that “you’ll never make anything of yourself in the hotel business”. Undaunted, and by now acquainted with the beau monde of Europe, Ritz arrived in London in 1889 — by way of fashionable establishments in Paris, Vienna, Nice, San Remo, Monte Carlo, Lucerne and Baden-Baden — to manage the new Savoy, where he engaged the pre-eminent French chef, Auguste Escoffier.

Eight years later, both men were sacked for financial irregularities — an imprudent move, in retrospect, since Ritz would go on to establish two of the grandest hotels in London. His loyal clientèle, led by the Prince of Wales, would follow. “Where Ritz goes, I go,” the future Edward VII is reputed to have said, cancelling a party at The Savoy in protest. He would be among the first to tread the Savonnerie carpets that extended the length of the new Ritz, from the Arlington Street entrance along the Long Gallery to the magnificently garlanded dining room that overlooks Green Park.

The notion of the grand, palatial hotel was born to cater for the leisured classes of the 19th century. Previously practical necessities, hostels catered for pilgrims, caravanserais for merchants, coaching inns for those travellers devoid of the requisite address book of Austen-esque gentry with whom to sojourn en route. Hotels, well into the dawn of the 20th century, smacked of vulgarity. Ritz would help alter that perception, creating a clubby environment of Louis XVI elegance in fashionable Mayfair, where his aristocratic guests could feel at home among each other in an oasis of gilded, frescoed and chandeliered intimacy. Hygiene was high on his list of non-negotiables. Ritz was among the first hoteliers to insist that every guest room be attached to its own bathroom, obviating the need for a public procession to the privy. Such innovations — which also included a telephone in each guest room — and meticulous attention to detail, down to silver-plated tongs for stretching the fingers of gloves, contributed to The Ritz’s reputation for “courtesy and elegance unlike any other hotel”, according to statesman and diplomat Sir Michael Duff. Writing about the hotel before the Second World War, Duff said: “It was thought of as ‘home’ in a sense that never applied to anywhere else.”

While Ritz’s first London creation — The Carlton on Haymarket — was replaced by the inglorious structure that is New Zealand House, The Ritz survives as the dernier cri in Belle Époque splendour, conjured with smoke and mirrors on a thin slip of irregular land and the last refuge of Edwardian privilege. Designed by the French architect Charles Mewès and his young English partner, Arthur Davis (who had just designed The Ritz in Paris), this opulent Parisian-style château, supported on a steel skeleton of American design, opened its doors to British society on 24 May 1906. This was the age of the Entente Cordiale, when French style and British manners kissed cheeks across the Channel and the pattern of British life began to change. While at The Savoy, Ritz was already lobbying to alter the licensing laws — whereby restaurants had to close by 11pm and could not open on Sundays — and The Ritz became the first hotel, according to Lady Diana Cooper, to which young, unmarried women were permitted to go unchaperoned.

Noted for its discretion, low-key glamour and impeccable service, it was (and remains) the temporary home of choice for assorted royalty and heads of state, from Aga Khan III — who kept a suite for 40 years — to King Zog of Albania, who arrived in 1940 with his retinue and suitcases stuffed with gold bullion. The francophile King Edward VII dined here with Alice Keppel, his favourite mistress, and it was over lunch at The Ritz, in January 1934, that Lady Furness, mistress of the future Edward VIII, encouraged Wallis Simpson to “look after him” in her absence. The Ritz would become their place of assignation. “It was later evident that Wallis took my advice all too literally,” Lady Furness noted wryly in her memoirs. The hotel thrived during the wars — in part due to the stability of its metal frame (made, ironically, of German steel) and concrete floors. While the Grill Room, beneath the pavements of Piccadilly, was transformed into a party-lovers bunker dubbed La Popote, above ground remained distinctly above board. Winston Churchill, Dwight D Eisenhower and Charles de Gaulle attended summits in the Marie Antoinette suite, while the Queen celebrated VE Day dancing the conga through the hotel; the chef drummed up a victory dinner, which included such dishes as consommé de la liberté, crème de la victoire and filets de sole Maréchal Haig.

Despite changing social mores, The Ritz remains The Ritz, its sense of occasion undimmed

One of the advantages of The Ritz — as Marie-Jacqueline Hope-Nicholson, scion of an eccentric family and a wartime member of MI5, noted — was that no one minded if you were unconventional. The corollary of this was an artistic guest list that would immortalise the hotel in words and music. Noël Coward’s song Children of the Ritz was inspired by convivial carousing beneath the dining room’s painted ceiling and bronze chandeliers, while the hotel’s fabled grandeur informs Irving Berlin’s Puttin’ on The Ritz.

Evelyn Waugh, perhaps more than any other, reproduced the spirit that prevailed from the 1920s. Banished from the Cavendish Hotel after the publication of Vile Bodies, in 1930 he held court at The Ritz, where he had been a regular since his Oxford days. Several scenes in Decline and Fall (1928) are set in the hotel, while the decadent personages who frequented the Lower Bar would resurface in his novels; Paddy Brodie and Brian Howard inspired, respectively, the characters Miles Malpractice and Anthony Blanche. In a curious twist of fortune, the neighbouring William Kent House also appears, thinly disguised, as the London home of Lord and Lady Marchmain in Brideshead Revisited. This magnificent 18th-century mansion, which Ritz long coveted and failed to wrest from Lord Wimborne, was eventually purchased by The Ritz in 2005, its restoration and transformation into a collection of lavishly decorated private dining rooms and two residential signature suites winning a Royal Institute of British Architects award in 2007.

Waugh, who dined frequently in the company of Nancy Mitford, Sacheverell Sitwell, Noël Coward and Lady Diana Cooper, among others, also affords us a glimpse into the hotel’s post-war culinary offerings. “Dining and lunching at The Ritz and spending a very great deal of money,” he writes in his diary, he would “cheer [himself] up” on caviar, lobster Newburg and tournedos Rossini. But The Ritz, while still managing to procure oysters, lobster and caviar for its guests, even after the Food Order of May 1942 capped dinners at five shillings and three courses, was not universally praised for the quality of its post‑war cuisine— a state incongruous with the joyful opulence of The Ritz’s dining room. “The problem was that the menus had not changed since the beginning of the 20th century,” says Executive Chef John Williams, who was awarded an MBE in 2008 for services to catering. “The menus remained the same — duck à l’orange and so on — for 70 years. It was not until the 1970s that French chefs began to learn English, and English chefs began to learn from them and develop their own style. You have to evolve, while respecting the classical spirit of Escoffier.”

That evolution began in 1980 when the hotel set about reviving its culinary reputation, including taking the radical decision to write menus in English. By 2002, the kitchens, which once provided pastries for Edward VII at Buckingham Palace, were again at the top of their game, earning a royal warrant for banqueting and catering services, awarded by the Prince of Wales. The Ritz is the only hotel to have been honoured in this way. Williams, who took over in 2004, continues the gentle art of “forwardthinking classical cooking” with an emphasis on seasonal, local produce, purity and a lighter cooking style, in keeping with today’s tastes.

The culinary reinvention was part of a wider renaissance within the hotel. With the purchase of The Ritz by Sir David and Sir Frederick Barclay in 1995, the hotel returned to British ownership, heralding a meticulous and complete refurbishment of the Grade II*-listed building. In 2001 — in a rare departure from the pervasive Louis XVI -style — leading interior designer Tessa Kennedy was engaged to reinstate the famous Rivoli Bar, a tribute to art deco beneath the arcade that inspired its name. In 2014, the hotel invested in a million-pound refurbishment of the kitchen. The new space uses induction throughout, making it far more energy and space-efficient, as well as cooler and more economical to run. As part of the ongoing works, in January 2015, two new interconnecting suites were unveiled on the seventh floor, bringing the total number of rooms to 136.

A hotel that looked on in horror at the public hysteria surrounding Charlie Chaplin’s stay in 1921 has grown accustomed to film companies in search of settings for a lost world and has since hosted characters ranging from the protagonists of the film Notting Hill to Downton Abbey’s Lady Edith. Yet, despite changing social mores, The Ritz remains The Ritz, its sense of occasion undimmed. Old-world formality rules and a dress code is applicable in the Palm Court and The Ritz Restaurant for luncheon, afternoon tea and dinner. Speaking of which, is there anyone who has not heard of afternoon tea at The Ritz? Served in the famous Palm Court, surrounded by panelled mirrors, golden trellising and a fountain bathing a gilded nymph, its popularity has led to the redefinition of the traditional afternoon tea. At The Ritz, it extends from 11.30am to 7.30pm. Noblesse oblige.

One story, perhaps, sums up the essence of The Ritz. In the 1980s, before a private dinner he was due to host in the Trafalgar Suite during a G7 summit, President François Mitterrand encountered an example of the famous British sense of humour. On noticing a large painting of the Battle of Trafalgar on the wall, the president’s aide-de-camp asked if it might be substituted with another. “I’ve got two others,” came the reply from the then-managing director.

“Agincourt and Waterloo.” The décor, trappings and style might be French, but the spirit remains — resolutely and indelibly — British. 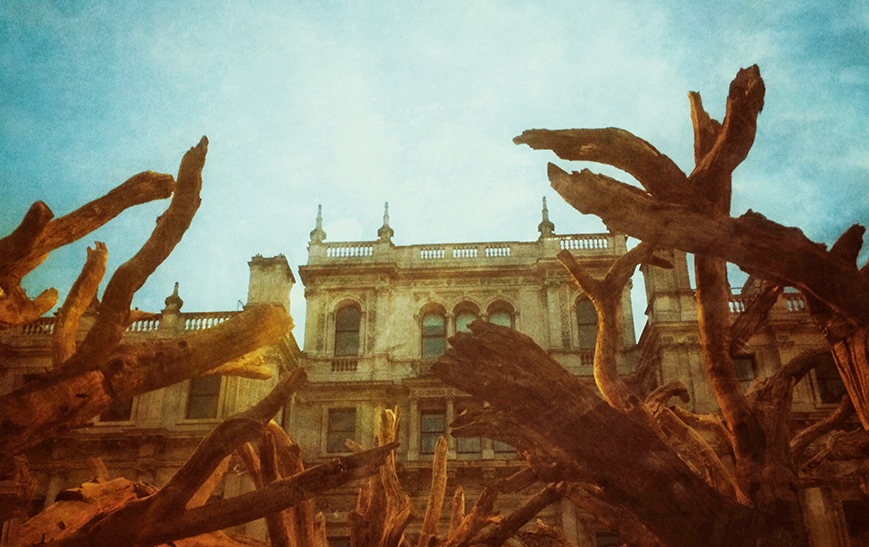